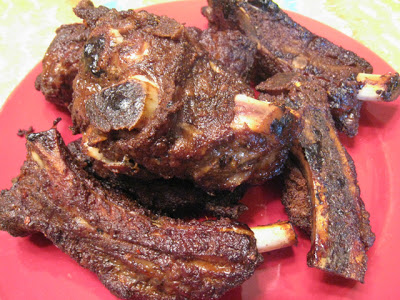 I got this recipe from Kate over at Pinkpancakes. Hopefully she doesn’t mind that I’m posting it, hmm. Well, let’s not tell her, just in case. hehe

I actually asked some people what their favorite spice rub recipes for ribs are and was told by my friend Richard that Stubb’s Spice Rub is the BEST. I’ve never had it (although I’ve had their BBQ sauce and it’s awesome), so I started hunting for a copycat recipe. Zero luck. Kate sent this to me, someone had given it to her and said it was a Stubb’s copycat recipe. However, a wonderful reader just informed me that this is actually a Bobby Flay recipe. It still might taste like Stubb’s, I have no idea, but I do know that it’s yummy regardless.

I did want to add mustard powder, but when I checked the pantry, I was out. Boo! My other suggestion is to make sure you sprinkle on an even coating, but do not pile it on. I tend to go overboard and it makes the ribs a bit strong. And do not fear the amount of salt! All spice rubs have insane amounts of salt.

By the way, my daughter’s new favorite show is Beauty and the Beast. I think I know every single line from the show now. Save me!!
“Be…. our…. guest, be our guest…..”

I love that the white and black pepper are treated like different ingredients. It seems like every time I watch TV, and someone uses white pepper, they say that it’s just like black. No, not true, they do not taste the same.

UPDATE April 9, 2012: A reader told me that this is originally a Bobby Flay recipe, so I linked back to Foodnetwork and updated the opening content and title. I was originally told that it was a Stubb’s copycat recipe though, but apparently it’s not. I didn’t want to remove Stubb’s from the content in case some people use this recipe but search for the keywords instead of bookmarking. It still might taste similar to Stubb’s Spice Rub though, I’ve never had Stubb’s, so I can’t compare. Thanks so much to the reader that discovered this mistake. Like most food bloggers, I always want to cite my sources